As a part of the Republic Day celebrations the Raj Path (the straight road connecting India Gate to Rashtrapati Bhawan, the official residence of the President of India) and the buildings at the end of the road and nearby are decorated with lights from January 26th to January 29. India celebrates its Republic Day on January 26 and the celebrations come to a close with the Beating Retreat, held on January 29.


India Gate adorned the tri-color (these are the colors of the flag of India) and looked beautiful. 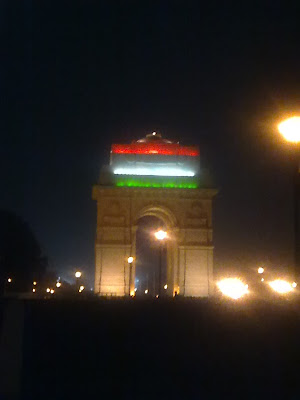 Below is the dome of the Rashtrapati Bhawan as seen from the Central Secretariat. 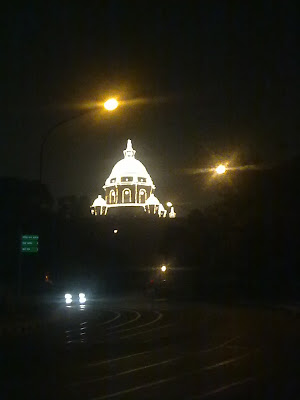 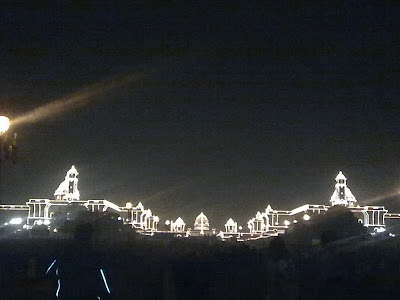 This is the Raisina Hill, Rashtrapati Bhawan in the middle, flanked by the North and South Blocks on either side.

And up next is the Parliament of India, looking like a jeweled crown. 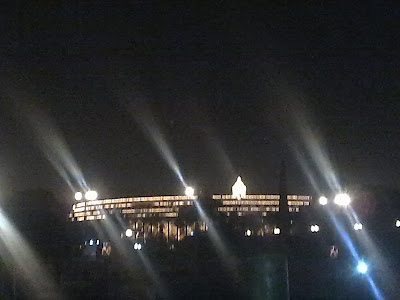 I had a fabulous time walking from India Gate to Raisina Hills with my mom and brother. There were many families out in full strength enjoying the cool evening.
Posted by Priyanka Khot at 11:16 PM 6 comments: 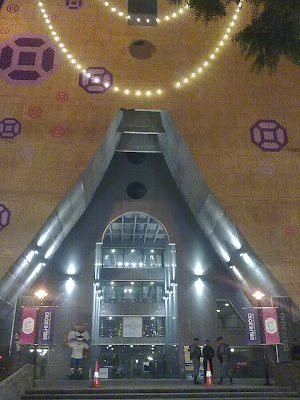 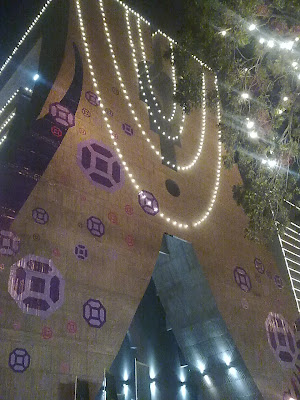 XIX Commonwealth Games 2010, will be held in Delhi from October 3 to 14. The city is gearing up for the international event with much gusto. This is the office of the Organising Committee. The building was lighted on the Republic Day as January 26 also marked just 250 days left for the Games. 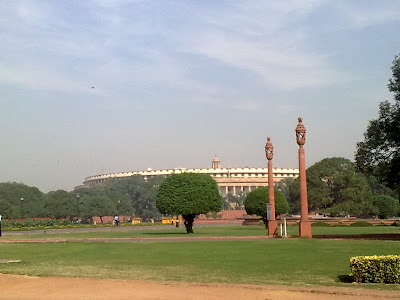 We, Indians, are today celebrating the 61st Republic Day. It was on 26th January 1950 that the Constitution of India came into force. This is the Parliament of India, where our lawmakers sit and decide the fate of the country.

I hope that the politicians sitting in this sacred chamber of democracy take a pledge to concentrate on realising the potential India has as a young republic rather than investing time in encouraging communal disharmony in the country.

P.S: Mile Sur Mera Tumhara was a song composed in the 1980s which spoke of India's unity in diversity and had several icons of that time featuring in the video. The same song has been improvised and a new video featuring the Indian icons of today has been released across the country today. You can see the new version, Phir Mile Sur, here. 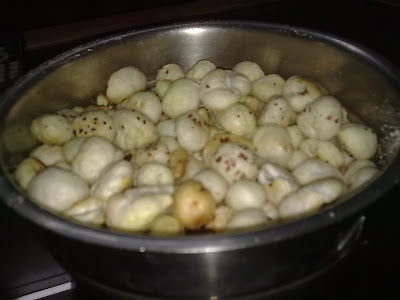 This is a bowl of slightly fried 'makhane' or puffed lotus seeds. They are sautéed in home made clarified butter, for some 5 minutes till they turn slightly golden and then a little salt is added for taste. This is a common evening snack during winters and is akin to popcorn. Do try it at home. I am sure you'll get addicted. :-)
Posted by Priyanka Khot at 7:39 PM 2 comments: 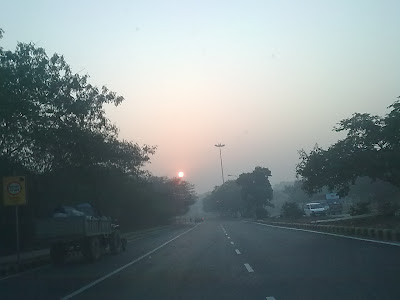 When I had started this blog in March of 2008, I had never thought I would continue with the blog for it to reach 400 posts. The way had seemed to long and far away. Just as I logged in to post today, I saw that today's post would be 400th. Wow! I have managed to capture four hundred pages of my Delhi in my phone and shared with the wonderful people of the blogosphere. Thanks to all of you who come regularly and appreciate my effort. This is what keeps me going. The sun seems nearer. Hoping for 400 more posts. :D 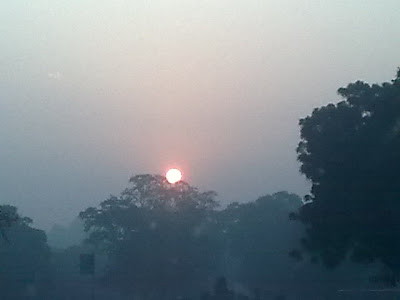 These are the photos of a cold sunrise from a freezing Delhi! The weather might be cold but I am blessed to be surrounded by warm hearts across the globe.
Posted by Priyanka Khot at 11:01 PM 5 comments: 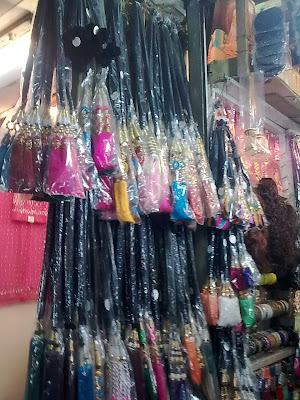 These colourful hair extensions are called 'paraandi'. They are traditionally worn by Punjabi women and over the years, other women from the North of India have also started wearing them. The black portion of the 'paraandi' is woven with the plait and the colourful part is left dangling at the end of the plait. I will someday show you a girl/lady wearing it.
Posted by Priyanka Khot at 10:37 PM 1 comment: 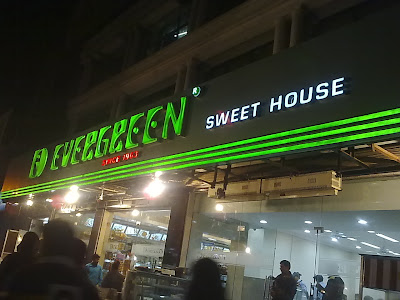 If you are sauntering around in South Delhi and craving for some good South Indian food then Evergreen Sweet House in Green Park is the place to go. That is exactly what my friends and I did last week. The food was delicious, company good equalling to a wonderful winter evening.
Posted by Priyanka Khot at 8:04 AM 5 comments:

Sweater, n.: garment worn by child when its mother is feeling chilly. 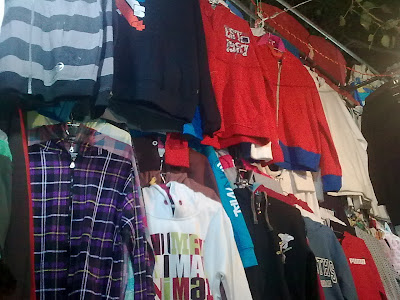 Jackets on display at one of the street shops in Janpath. I truly believe that no amount of winter wear is sufficient and hence I was shopping once again. The search was not satisfactory so I am planning another shopping spree. You are invited to join me for some fun shopping and a hot cuppa coffee. :-)
Posted by Priyanka Khot at 10:58 AM 1 comment: 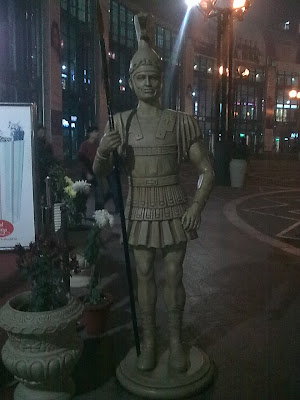 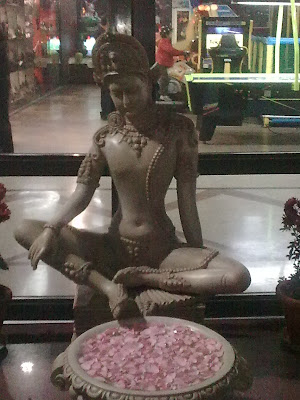 Ansal Plaza, one of the first malls in Delhi, has installed these beautiful statues at the entrances to welcome shoppers. I liked the idea and the statues.
Posted by Priyanka Khot at 8:10 AM 5 comments: 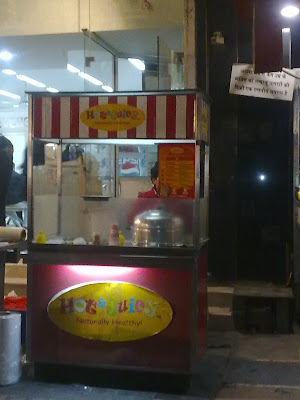 These Hot n Juicy kiosks have over the last couple of years come up all over the city. They sell various flavours of boiled corn seeds. It is a yum and hot treat during the long walks in the famous Delhi winters. I have decided to take a Thursday resolution not to crib about the cold anymore. So here is a happy winter to everyone!
Posted by Priyanka Khot at 7:45 AM 4 comments: 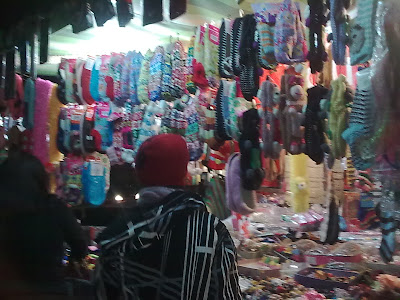 Walking with my friends in the Green Park market, I just could not get over the cute collection of socks that the roadside vendors had on display. I oohed and aahed enough to ensure that one of my friends owned up to buy the most cute one of them all for me. Now I plan to be "happy feet" through the remaining winter days. 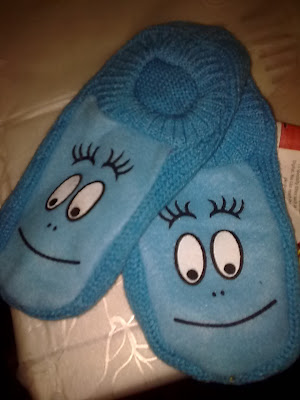 Thanks Charu! I am glad I have the power to bully friends into buying cute things for me... :D
Posted by Priyanka Khot at 9:17 PM 6 comments: 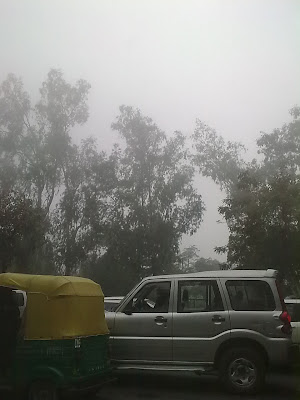 This is the view of the morning as I was struck in a massive jam on Friday, which began on a very foggy note but the traffic helped fight the fog.
Posted by Priyanka Khot at 10:27 PM 3 comments: 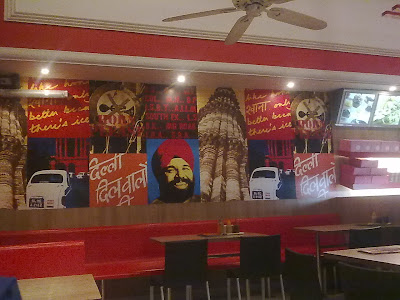 With the mercury dipping to less than 8 degrees Celsius over the past few days and cold winds blowing all around, Nirula's, an eatery in Defence Colony is one of our favourite hangout zone. The walls are colorful and will tell you all there is to know about Delhi - Qutub Minar, white Ambassador car, a sardarji, horn signs visible on the trucks and yummy food. A happy winters everyone!
Posted by Priyanka Khot at 1:43 PM 5 comments: 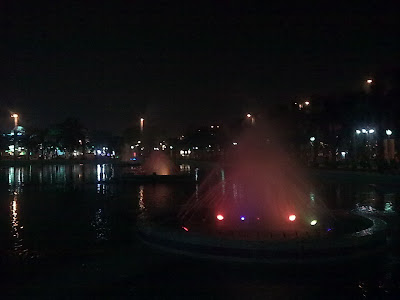 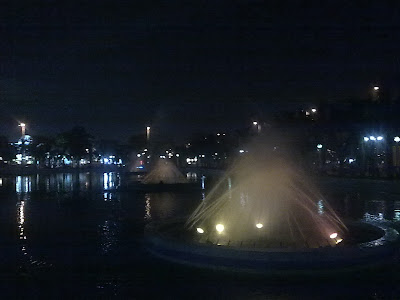 These are the colored fountains at Pragati Maidan. Sitting by the side of water in summers is a treat, but at present when the mercury is dipping to dangerous levels this is one place to avoid. A brrrrrrrrr Warm Good Morning to all.... brrrrrrrrrrr (it is too cold) :-)
Posted by Priyanka Khot at 8:24 AM 6 comments: 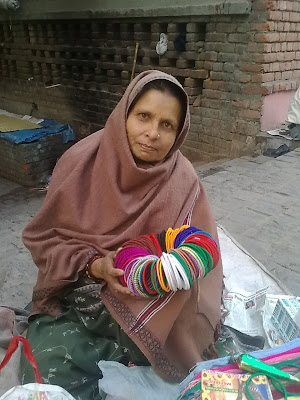 This is Phooli, a woman, who makes and sells bangles outside the Dilli Haat complex. I had a fun talk with her and she convinced me to buy a dozen of these colorful bangles. These are a good buy to gift and if your are greedy like me to keep them all for yourself.
Posted by Priyanka Khot at 10:24 AM 5 comments: 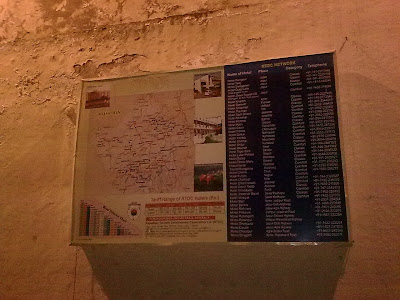 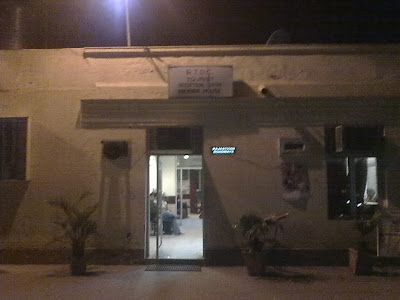 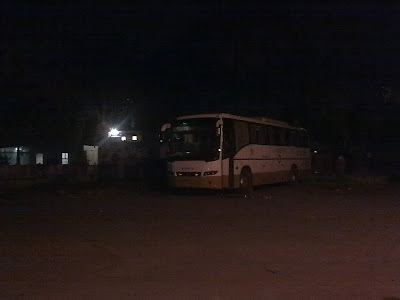 These are photos from Bikaner House, near India Gate. Tourists aiming to visit Jaipur, the capital of the state of Rajastan, can board Volvo buses from this place. The buses ply at an interval of 30 minutes. The fares vary between INR 240 to INR 500. Bikaner House is centrally located and hence is a convenient place to board the bus for Jaipur. Since I have relatives in Jaipur I often use the service and can vouch for it. So next time you want to go to Jaipur for a weekend you know where to get a bus from. :-)
Posted by Priyanka Khot at 10:38 AM 4 comments:

“Reading is a basic tool in the living of a good life.” 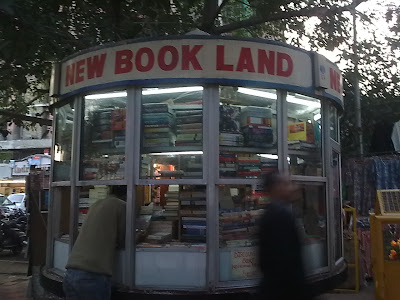 This is my most favourite book shop, New Book Land, in Delhi. In this small space, you can get all you want when it comes to books. This is also a joint where my friends and me meet anytime a Janpath trip is planned. The shop sells original books at reasonable prices. A must stop shop. I thought that since we are very much still celebrating the New Year, it was nice to post something related to reading, which is very close to my heart. Hope more people follow the passion of reading in the coming year.
Posted by Priyanka Khot at 10:23 PM 3 comments: 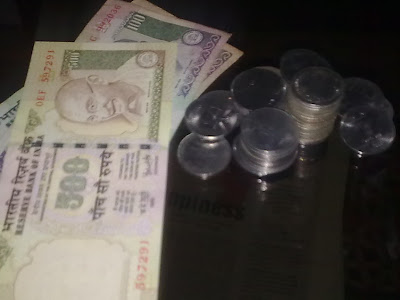 After a recession hit 2009, I think money and some change is the best way to usher in 2010, with wishes that may the economy strengthen manifold. A very Happy and Prosperous New Year to the members of the bloggersphere. :D

May peace break into your home and may thieves come to steal your debts.
May the pockets of your jeans become a magnet for $100 bills.
May love stick to your face like Vaseline and may laughter assault your lips!
May happiness slap you across the face and may your tears be that of joy
May the problems you had, forget your home address!
In simple words ............
May 2010 be the best year of your life!!!

Click here to view thumbnails for all participants
Posted by Priyanka Khot at 8:31 AM 10 comments: