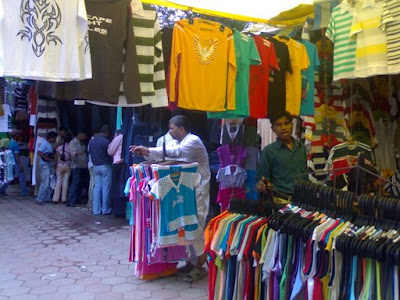 This is college heaven. Most of the college students, who are not brand conscious but would kill to have a trendy wardrobe for less money flock the Janpath market in search of good bargains. The fact that I no more shop at Janpath... makes me feel.. old. :-)
Posted by Priyanka Khot at 1:43 PM 1 comment: 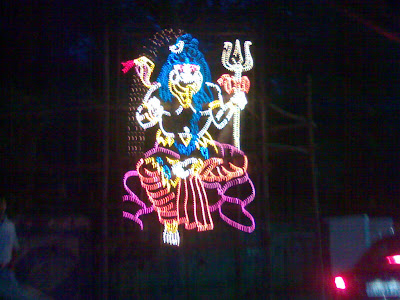 This is a lighted image of Lord Shiva. In India and particularly in West Delhi, Hindu Gods are pieces of art work, especially during festivals. This photo I clicked on Janmashtami day, the birthday of Lord Krishna. Even though the day celebrates Krishna, all the Gods are given adequate importance. I did not manage a single photo of Lord Krishna since crowds thronged all the display areas. However, I managed to capture Lord Shiv who was adorning a pillar on the way back home.
Posted by Priyanka Khot at 8:41 PM No comments: 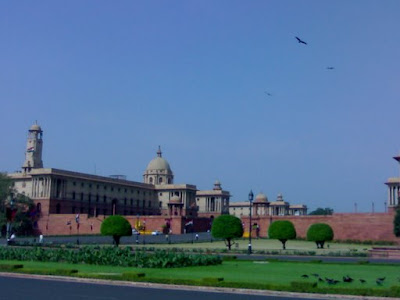 This is the South Block at the Raisina Hills. It flanks one side of the Rashtrapati Bhawan (Presidential Abode). One of the most majestic sites that one can find in modern Delhi, this building houses some very very important offices like the Ministry of External Affairs, the Prime Minister’s Office and the Ministry of Defence. Forget all that, I am totally mesmerized by the architecture and the color of the sky. It feels that even nature knows that this is the highest office of the country. :-)
Posted by Priyanka Khot at 3:38 PM 4 comments: 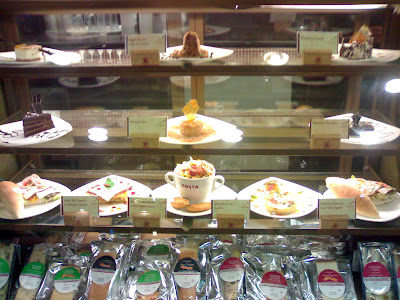 A treat for all of you. This is the food display at the counter of Costa Cafe, a slightly expensive cafe chain in Delhi. Slightly heavy on the pocket but their stuff is every bit worth the money, as you can imagine from the photo. Happy eating! :-)
Posted by Priyanka Khot at 10:01 PM No comments: 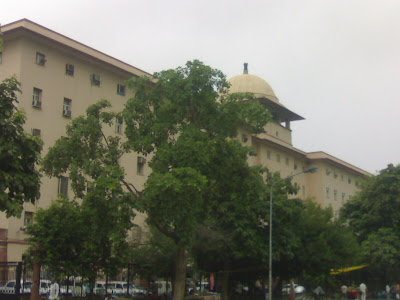 This is the 'Krishi Bhawan' or the Agricultural Office. This is where the Agricultural ministry sits. Considering that nearly 70% of the Indians are occupied in agriculture this building is a very important part of the ministerial block. the best part about Central Delhi is the greenery that you will spot. All the buildings on the Raisina Hills are made in a similar style.
Posted by Priyanka Khot at 9:56 AM 2 comments: 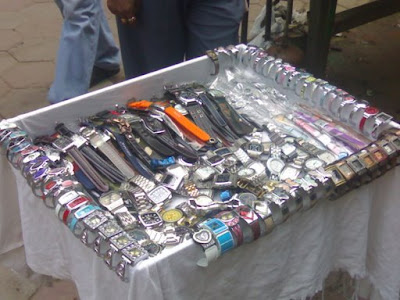 This is an apt time to have a number of watches on the blog. My time management skills are going down the gutters, which is not a great excuse for excusing my irregularity. So I hope that from today onwards I will give more time to the blog. This is how made in China watches are sold in Delhi. a good bargainer can manage to get a watch for as less as INR 100.
Posted by Priyanka Khot at 9:30 AM 1 comment: 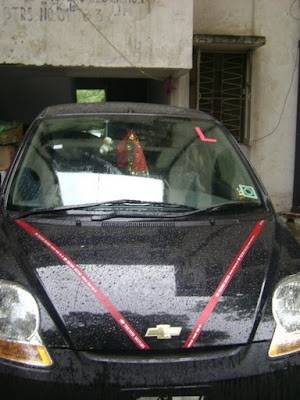 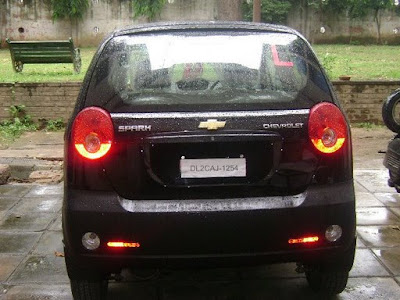 Well I am guilty of neglecting the blog for a long time now. The culprit is right here... I was engaged all week in the formalities of acquiring this black beauty. This is my first car. Chevrolet Spark. I plan to drive to the remotest parts of Delhi once my driving skills improve and bring lots and lots of more Delhi photos for you. :-)
Posted by Priyanka Khot at 11:21 AM 9 comments: 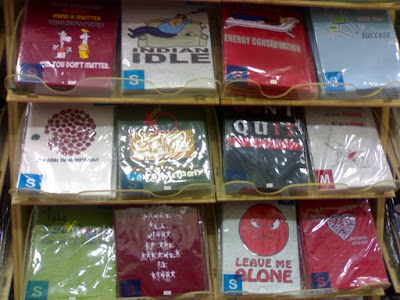 This is T-shirt shop that has some nice, witty and some really funny quoted T-shirts. I really like the 'Indian Idle'... and please note that I don't want you to "Leave Me Alone" :-)
Posted by Priyanka Khot at 12:27 PM 1 comment: 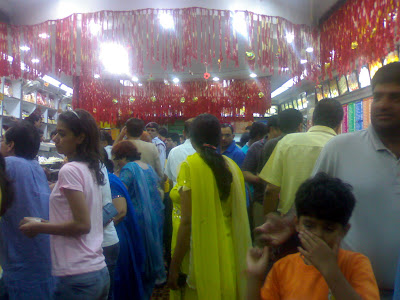 Since I had been missing from the blog scene for some time now, I decided to cover up by posting two pictures. India has been in a festive mood for two straight days. Yesterday was our Independence Day and today was the festival of Rakhsha bandhan, that celebrates the relation of brothers and sisters. The sisters tie a silk thread called Rakhi, on the wrist of their brothers, asking them to pledge protection of the sister and the sister prays for a long life of her brothers. The photo is of a sweet shop. Sweets is a big BIG part of festivities in our part of the world. The long threads dangling from the roof are 'Rakhis' that the shopkeepers used to decorate their shops. It sure did work as the crowd proves.
Posted by Priyanka Khot at 10:01 PM 1 comment: 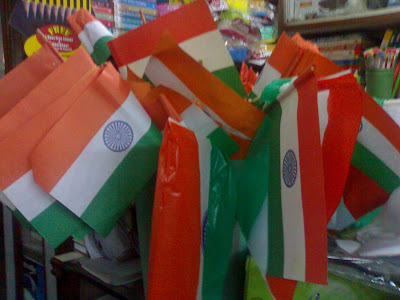 Sorry sorry sorry. My office has kept me away from the blog; plus the rains ruined the cable that brings the wonderful world of Internet to my home. So here is a belated Happy Independence Day (August 15) wish to all the Indians across the the world. All the shops in Delhi carried these wonderful little flags to celebrate the Freedom struggle that our leaders won and the freedom that most of us celebrate in our daily lives. Jai Hind! (Long live India)
Posted by Priyanka Khot at 9:38 PM 2 comments: 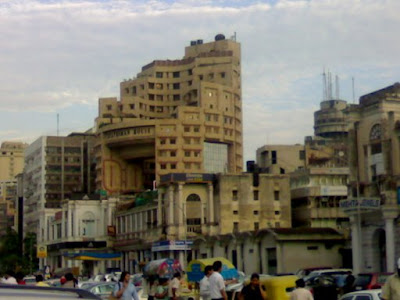 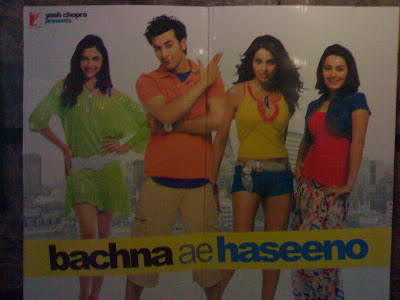 Being a complete Bollywood junky I watch films quite regularly. Today, when I was at the theater to watch 'Singh is Kingg'(a big disappointment), I saw this poster of the upcoming film, 'Bachna ae Haseeno' translated it means 'Beware o' Beauties'... Most girls in this part of the world are drooling over Ranbir Kapoor, touted to be the next big thing on the Indian Silver Screen. Thought the girls on the blog would love to feast on this good looking dude... and the men can drool over (from left to right) Deepika Padukone, Bipasha Basu and Manisha Lamba. Happy weekend! :-)
Posted by Priyanka Khot at 8:23 PM 8 comments: 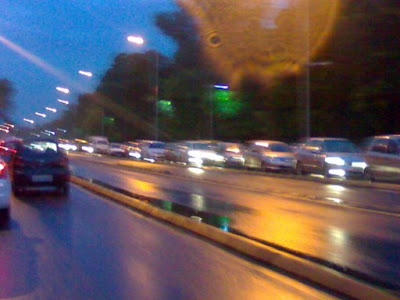 Rains have a way of making everything beautiful. This photo, though technically not the best, is one that I liked, because the rain gave a great hue to the cars and the road. The colors made the traditionally hair pulling encounter of being stuck in an hour long traffic jam something of a cherishing experience. :-)
Posted by Priyanka Khot at 10:29 AM 5 comments: 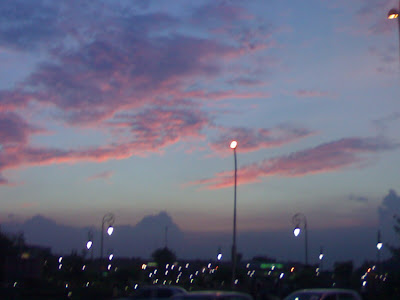 Since the time I read on Eliane's blog of the blushing buildings, I looked at the Delhi skies for the same emotions. The impending rains granted my wish yesterday, when the sky turned almost crimson in anticipation of the thunder and showers. Almost switched on the poet in me :-)
Posted by Priyanka Khot at 11:56 AM 6 comments: 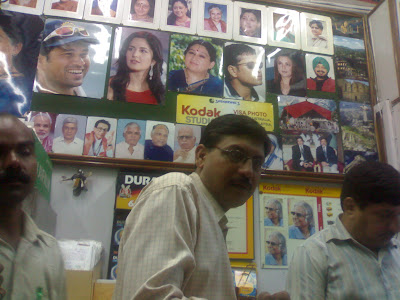 The man above is responsible for most of the photographs majority of Gole Market residents paste on their forms --- school, university, jobs or government documents. In the background are the studio photos he has clicked of several political leaders, sports-persons and even famous Bollywood actors. Getting clicked by him means almost rubbing shoulders with the who's who of Delhi. :-)
Posted by Priyanka Khot at 9:52 AM 4 comments: 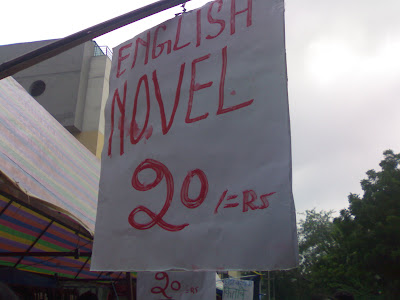 Bargain doesn't come better than this. I spotted this sign in one of the street side markets adjacent to the Mall I showed yesterday. Selling books for a mere INR 20 or USD 0.4722 is surely a Novel (pun intended) idea. :-)
Posted by Priyanka Khot at 11:48 AM 9 comments: 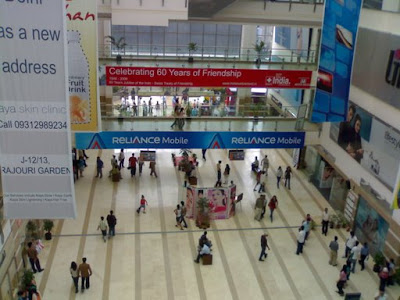 This is the Lifestyle City Square Mall in Rajouri Garden. Most of you know about my tirade against Malls, however, in extreme humidity that is plaguing us here in Delhi, the centrally airconditioned food courts are a blessing for a Saturday afternoon outing. Plus this photo is apt for today as it has a message in Red. Happy International Friendship Day!
Posted by Priyanka Khot at 7:28 AM 2 comments: 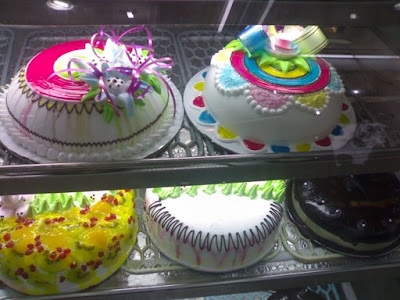 I was cake shopping for my mother's birthday a few days ago. Treating my blogger friends to the best of cake photos was surely in order. Happy Drooling. :-)
Posted by Priyanka Khot at 11:29 AM 5 comments: 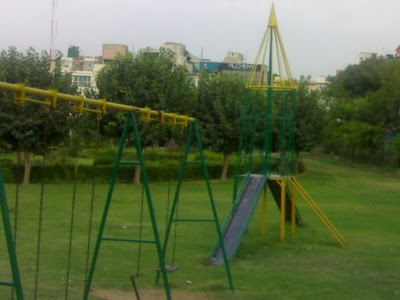 Ah! coming up with the photograph for today's theme was very very difficult. After scrounging the streets of Delhi for over a week and looking and re-looking at my collection of photographs over and over again, I gave up, closed my eyes and asked myself what is the thing, made of metal that I love. The answer that my brain provided was simple... apart from jewelry you like swings in the park. So here are swings and a rocket shaped jungle gym for a happy and playful August. :-)