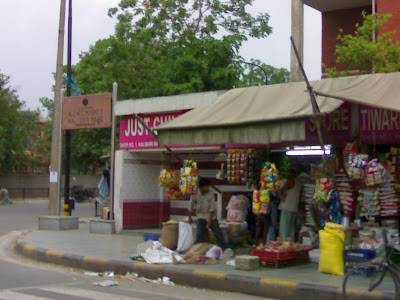 This is a sample of shops that adorn the various residential colonies of Delhi. In Hindi we call them "Kirane Ki Dukaan, Kirana means groceries and Dukaan means shop. I like to believe that these shops have some sort of magical powers. I mean they are squeezed into a small area but would have more variety of things than a sprawling supermarket. With malls coming up with loads of free schemes... I fear for the lifespan of these Kirana shops. :-) 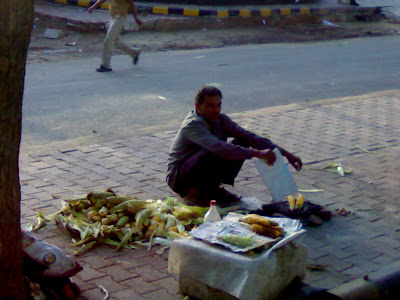 It is raining in Delhi and corns that are roasted on coal fire are the treat for the common man. I cannot guarantee the hygiene aspect of it, but I can certainly wager on the lip smacking taste that it offers. The roasted corn is amply supplemented with various salts that give it a tangy and spicy flavor. So if you planning a Delhi trip try and give "Bhutta" a try. :-)
Posted by Priyanka Khot at 8:43 PM 1 comment: 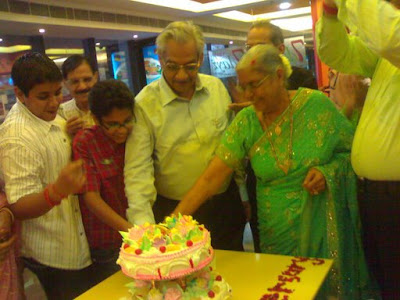 Flanked by their grandchildren, a couple celebrate glorious fifty years of marriage. In these times this occasion seems to be rare. Wishing Fifty more years of married bliss for the couple in their golden years - Mr and Mrs. Khamboj!
Posted by Priyanka Khot at 8:51 AM 2 comments:

Work On the Road 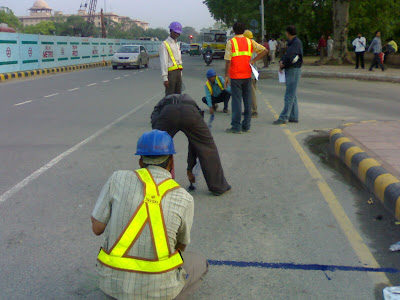 These men were working in the middle of the road. I have no idea why they were painting the road blue. Although, my guess is, it was something important considering the commotion that preceded the actual line marking.

With the erratic drivers on the road... my prayers are with these men who brave the traffic for fulfilling their duty. :-)
Posted by Priyanka Khot at 9:14 PM No comments: 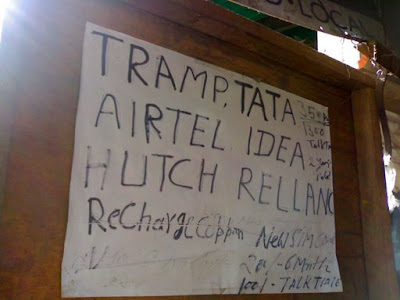 This is a temporary hand written board, I spotted outside a shop that aims to informs about the various mobile connections and recharge coupons available in the shop. The person preparing the chart misspelled Trump as Tramp. Now this makes me wonder... what kind of service does this brand provide. ;-)
Posted by Priyanka Khot at 10:34 AM 4 comments: 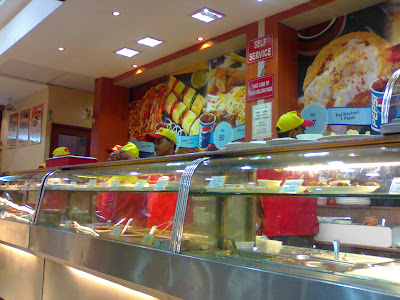 Bangla Food House is a self service vegetarian restaurant in Gole Market, Delhi. This place has good, delicious and light on pocket food. Has a huge variety of vegetarian food and Indian twists of dishes like pizza, noodles, Manchurian etc. In fact you name it and they have the Indian version of it. Plus the place has a rich array of Indian Snacks too. Its a place where I have many memories of enjoying with my friends :-)
Posted by Priyanka Khot at 9:38 PM 2 comments: 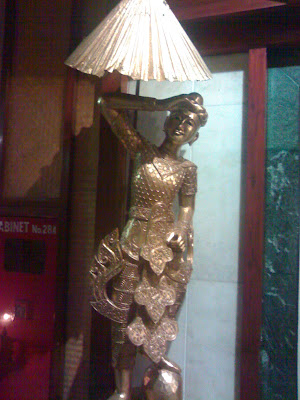 This is metal statue that caught my fancy at the Chinese restaurant- Woks, at the Intercontinental Hotel, Barakhambha Road, New Delhi. The restaurant is at the 28th floor of the five-star and gives a great view of the whole city from the windows. But incessant rains hindered my taking pics of the city lights. No worries next time.

Greetings from the gray, watering city :-)
Posted by Priyanka Khot at 9:35 AM No comments: 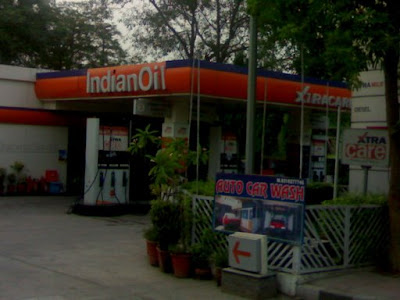 A typical petrol station in Delhi, although without any vehicles lined up to be filled it seems a tad bit unreal. Although its not a surprise considering the soaring oil prices the world over. Hope that the credit crunch problem solves soon. :-)
Posted by Priyanka Khot at 9:34 AM 1 comment: 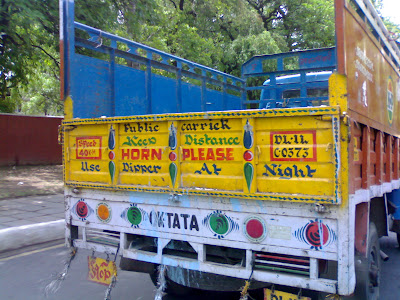 This the backside of a truck (a large vehicle that carries huge loads from one part of the country or city to another). Most of the trucks are painted in bright colors like this one. They are one of the best pieces of mobile art work visible on the Delhi highways and other highways across the country. I hope that one day I am able to spot and click a truck that has a witty one-liner painted across it. :-)
Posted by Priyanka Khot at 11:31 AM No comments: 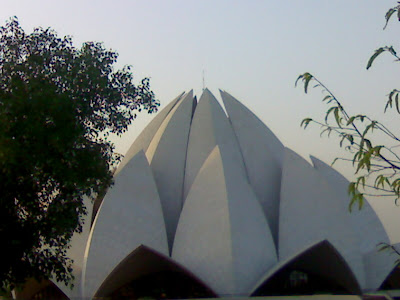 This is the famous Baha'i Temple, also known as the Lotus Temple because of its Sydney Opera House inspired structure. It is a very calm and quiet place that takes one away from the doldrums of the city despite being in the center of chaos.
Posted by Priyanka Khot at 11:48 PM 1 comment: 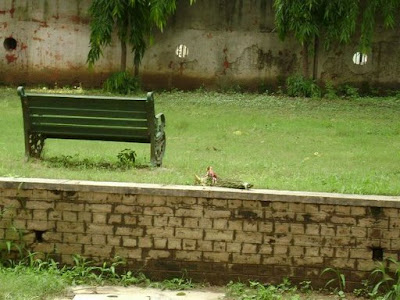 With incessant rains drenching Delhi, I had no choice but to go to my back-yard for inspiration. Next to the bench I saw a bouquet of wilted flowers that I guess someone might have left. The only thought that this image left me with was that somewhere a heart must have been broken when the flowers were discarded so gruesomely.
Posted by Priyanka Khot at 11:30 AM No comments: 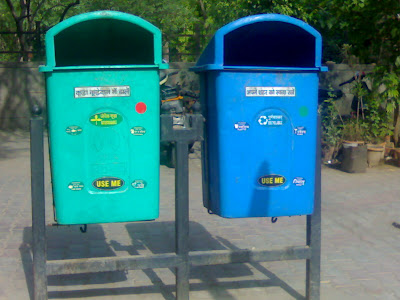 These are the dustbins that adorn the roadsides of Delhi. I had many people staring and smirking at me while I was clicking this photo. I can imagine that they were surprised that I wanted to capture these blue and green bins. To tell you the truth I really am thankful to the Delhi Government for taking this step. Delhites are actually now more aware of their surroundings and keeping the city clean. Clean Delhi, Green Delhi. :-)

@ Tejbir: I am so happy to know that the Delhi Photo Dairy has managed to bring back memories for you. :-)
Posted by Priyanka Khot at 8:57 PM 1 comment: 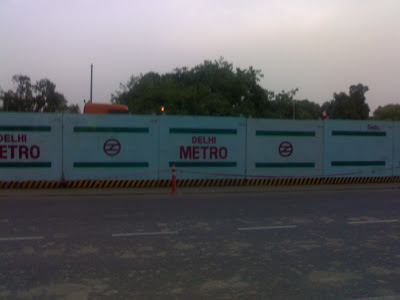 With the Metro construction blanketing almost all of Delhi, this is a usual scene on Delhi roads these days. I must say, the people managing the construction of the Metro are doing a fantastic job considering that they are spread through some of the most important roads of the city, yet they manage the traffic quite well and I have never spotted dirt on the part of the road where the construction is not happening.
Posted by Priyanka Khot at 8:32 PM 3 comments: 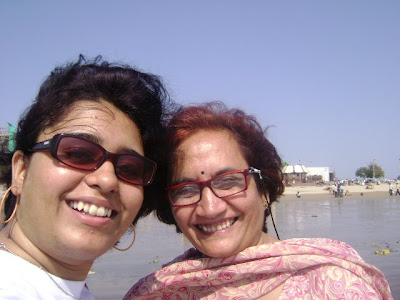 Me and my mom share a wonderful relationship. She is one of my best friends and just like I announced today on the Meow FM that my mom is my puke-box in a very good way. I mean its mandatory for me to puke out all the details of the day to her. She is the axis around which my whole world revolves. I could have pasted any photograph of both of us, but I wanted to continue with the theme of posting only the pics that I have clicked from my cell phone. So here are Mom and Me having fun at the Girgaum Beach in Mumbai. Its a moment I would cherish for all my life.
Posted by Priyanka Khot at 7:20 PM 3 comments: 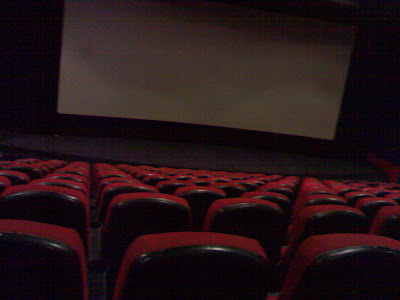 This is a typical multiplex that you can find in various places in Delhi. I visited one today to watch the fantasy film Bhoothnath. Its a very cute story about a relationship that a Ghost shares with a small Child. Amitabh Bachchan, the Superstar of the Millennium is back in my good books for his performance in this one. He is fantastic. The Child is so adorable that I was floored. Its a must watch for those who are bored of love-stories and can appreciate a good film which has its comic, sad and happy moments. Below is a poster of the film. 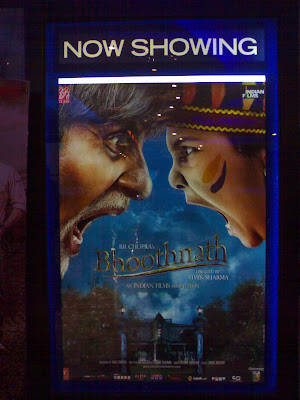 Posted by Priyanka Khot at 9:01 PM No comments: 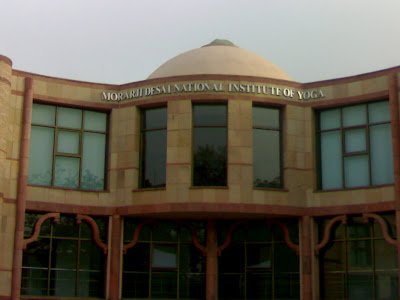 This is the Morarji Desai National Institute Of Yoga. This is where my day begins. I take Yoga classes here every morning. I have just recently started with the classes and I am hoping that it helps me get into shape soon enough. The ambiance is very serene and we do our breathing exercises here... 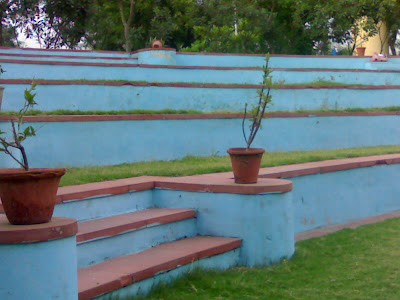 Hope all of you are exercising too :-)
Posted by Priyanka Khot at 9:55 PM 5 comments: 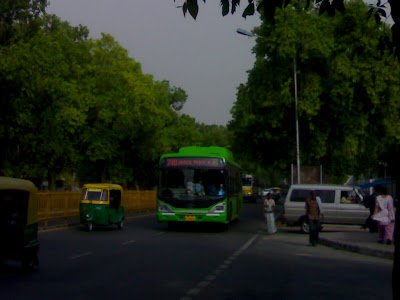 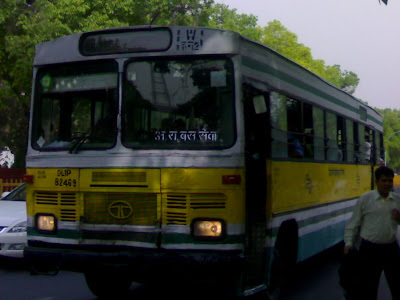 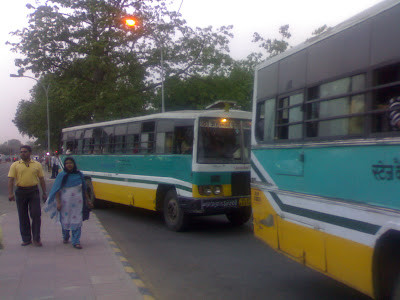 Today is a landmark of sorts, I have posted the 50th photograph on the Delhi Photo Diary. I want to dedicate this post to the Delhi's public and private buses. They take me to various places in Delhi. I might crib and rant about them... but at the end of the day they are the lifelines that help Delhi and Delhites move. So here is a dedication to the Buses of Delhi that make this blog happen!

If you want to read about what I think of Delhi Buses and my experiences on board... click the following links:

Weird beginning of a lifelong friendship! 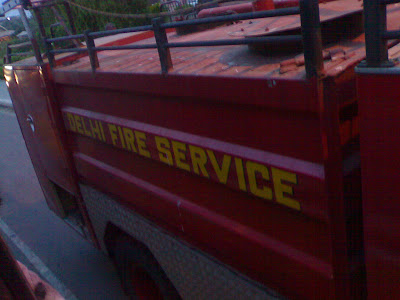 The red truck that saves the city by putting off the fires that threaten and thanks to the Delhi Fire Service seldom succeed. The fire truck and fire fighters have always fascinated me. Of course as far as fascination of fire fighters goes... that has had different reasons over the passing years . :-)
Posted by Priyanka Khot at 7:44 PM 2 comments: 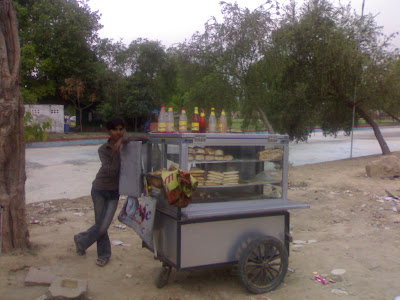 I have never had the good fortune of tasting the delicacies, this man sells. But I have seen many people enjoying the indigenous burgers with an Indian twist to the American fast food. Someday when my throat is strong enough to risk it, I'll be brave enough to taste it. :-) 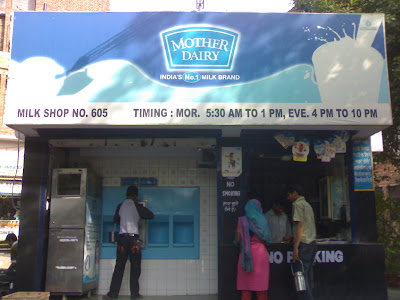 The lifeline of Delhi. The Mother Dairy booths all across the city provide milk early in the morning and at evenings. I remember that as a kid I used to be especially excited to put the tokens through the token hole and watch the milk pour down. I really wish something as simple as that could excite me even today. :-)
Posted by Priyanka Khot at 8:16 PM 3 comments: 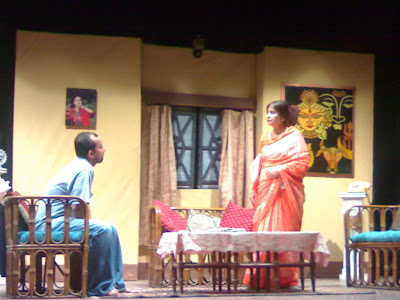 A still from a Bengali play titled 'Asatyakaam' that I saw today. Even though I do not understand the language but both the actors were so brilliant that they kept the audience in rapt attention. the story went as follows:

A young man visits a lady in her middle-age. They engage in small talk with the boy exuding nervous energy. The boy reveals his identity and his father's name to the lady. She instantly recognises the man to be her son, whom she had left when he was just 5 years old. The young man questions his mother for the reasons she had left him. The mother cooks up a story, saying that his father had killed all her singing aspirations, was a sadist and behaved very badly with her. She adds that she left the father because she could not bear the brutal treatment JUST because she was an Indian girl. The son loses his temper and tells his mother that he knows that she was forced to leave his father because she had been impregnated by his father's best friend. The play ended with the son leaving his mother crying with tears of guilt that promise to ruin her life for all times to come.

It was not a happy story that I usually enjoy. But I was really impressed with the actors. The Son was excellent in projecting the anguish of a child, who was abandoned by his mother and had faced the hardships of life answering difficult questions about his own mother. The Mother on her part, was exceptional in adorning the role of a woman who made a choice earlier in life, a choice that makes her guilty but at the same time the good things that come with this new life are worth forgetting the injustice she met out to her son. I had goosebumps after watching her express remorse at the end of the play. 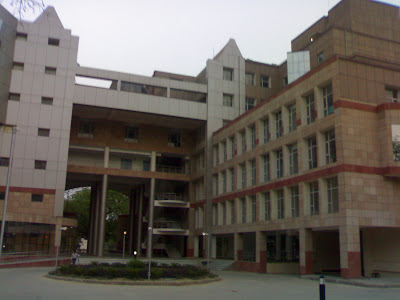 This is a swanky building being readied for the students pursuing their Post Graduation in Medicine from Ram Manohar Lohia Hospital. I walk past this building everyday but I though of capturing it only today. This proves the old adage 'Sometimes it takes a lot of time for you to see things in front of your  eyes.' :-)

FOR GOD ALL ARE EQUAL 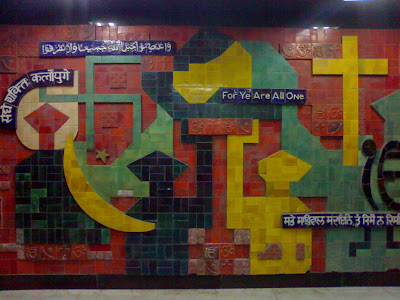 This is a very secular wall mural that I spotted in a sub-way in Delhi. It gives the message in different languages that FOR GOD ALL ARE EQUAL. Nice message for the world that is plagued with discrimination and religious rioting. :-)
Posted by Priyanka Khot at 8:47 PM 1 comment: